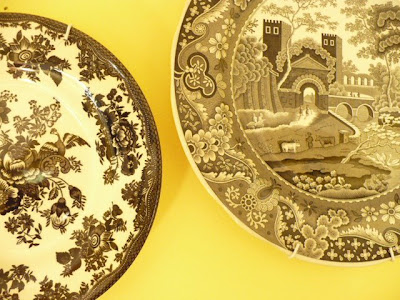 I decided to pop into Goodwill on Wednesday to see if they might have any white platters (no they didn’t) but they had so many other neat things! It’s always a cheap thrill when I find great home decor items at the thrift store that I don’t even have to do anything to! What! Nothing needs painting!! Amazing! I first found these black and white Royal Stafford plates below ($2.52 for two) and then the Rover Plate (Pottery Barn Fireside Series) They had the whole PB series but since the series is cigar related the rest didn’t interest me – just the one with the dog that says “Rover”. I walked around and kept seeing so many great things I had to go back to the front to get a cart! That’s a silver tray with a mirror – it’s just reflecting the toile. 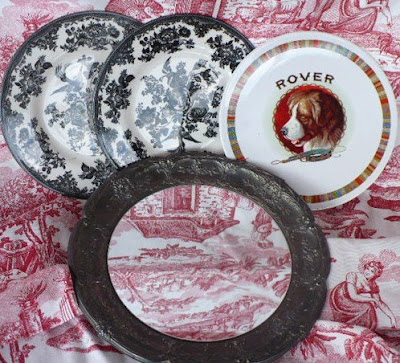 I hadn’t been to Goodwill in a while and the last time I went they were bare. I just figured people were starting to have yard sales and weren’t donating. I was wrong! I wish I’d taken my camera. They had a beautiful rattan patio set, so much furniture (mostly tables, desks & small bookcases), it was really packed with good stuff. Quite a few things I looked at were from TJ Maxx! 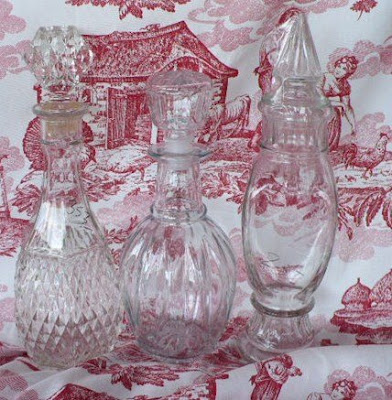 They had about 7 or 8 decanters and I chose the three that I liked the best. I think the shapes are beautiful. We don’t drink so I’m not planning on filling them with liquor. They’d be pretty filled with water paired with a pretty glass on a bedside table. What would you do with them? 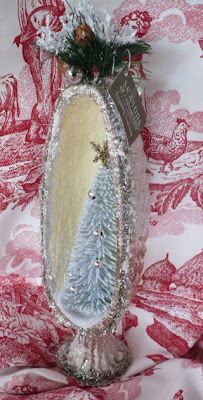 I was so thrilled to find this brand new glittery Christmas bottle brush tree from Seasons of Cannon Falls ($2.32)! It’s sits in a silvered glittery pinecone. Of course, now I have to dig out a Christmas box so I’ll be able to use this season! 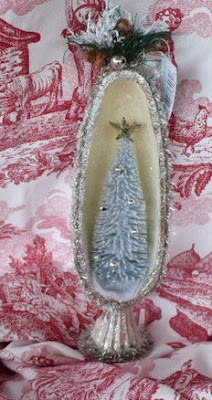 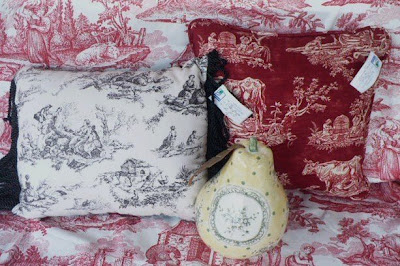 Then I went to the pillow section and snatched (literally) up these two toile pillows! The red one is Waverly($2.20), the black toile ($2.60 – I guess fringe is worth an extra 40 cents!) will either go in my window seat or my bedroom. The yellow and green toile ceramic pear I bought to put in my kitchen but it’s too big for the shelf I have. So I’ll have to come up with something! 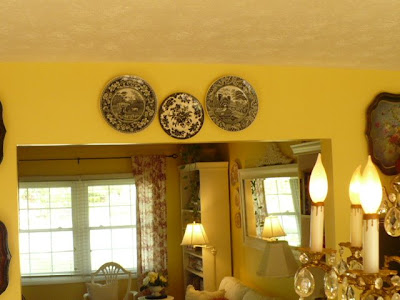 I hung one of the transferware plates in between the two large plates I already had up there. That plate was perfect for that spot! I had hung the two larger plates too far apart but it didn’t bother me too much so I was just going to let it be. Now I found a smaller plate that fits right into that spot! The second plate will go somewhere else.

I spent less than $30 on all this and I know where everything is going. I rarely buy something without knowing where I’m going to put it. Once in a while that’ll happen but more often than not I know what I’m doing with a piece. I’ll show you next week how I’ll use what I bought at Goodwill.

I hope everyone has a fabulous weekend!