Recently, the 1950s housewife lifestyle has become more popular. Maybe it’s because of shows like Mad Men (which was actually set in the 60s), or because people are getting tired of their hectic lifestyles and wish for “the simple good old days,” or for a host of other reasons. But regardless of why that lifestyle is making a comeback, there’s no denying there is some appeal to it. Retro ads and illustrations always make 50s people seem so happy (and stylish)! But Should You Be Like an Old Fashioned 1950s Housewife? Let’s see if we can answer that question! 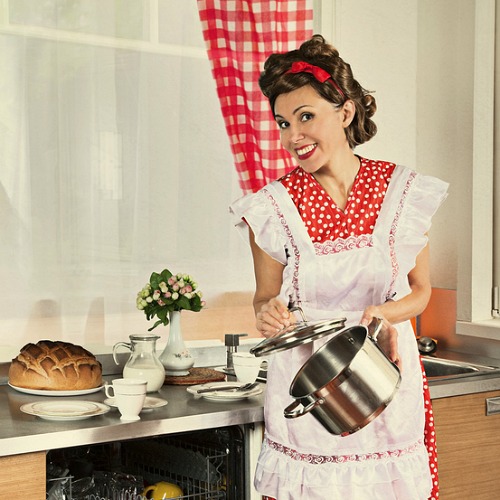 As with any lifestyle, there are pros and cons and more neutral aspects of the lifestyle to consider. Depending on your personality and expectations, you may love or hate emulating the life of an old fashioned housewife.

Should You Be Like an Old Fashioned 1950s Housewife?

First of all, let’s consider what made a 50s housewife different from a woman in the years before or after. World War II officially ended in 1945, so a 50s woman was not a Rosie the Riveter. With all the men back, many women were pushed out of the workforce and were back at home (though some women did manage to keep their jobs, with women making up a third of the workforce in the 50s). But in general, the 50s was all about being traditional. After the horrors of the war, it was comforting for people to fall back into the security of traditional gender roles and social norms. Men worked and made the big decisions, and the women stayed at home with the kids and kept the household running. Of course, everyone’s life wasn’t like that, but generally that’s what life was like for most middle-class white families in the 50s. Minorities and people with lower incomes had a much wider variety of lifestyles in the 50s, but this traditional conformity was supposed to be the ideal. 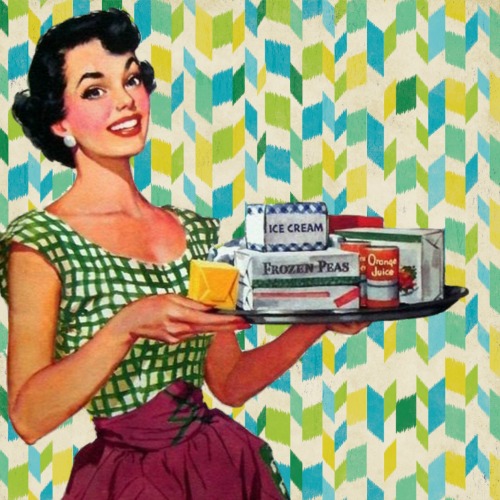 Nowadays when we look back at those times, many people like to make it sound as though every woman was unhappy in her traditional role. And of course, some women were, which is why things have since changed. But a lot of women were also either 100% satisfied with their life as it was, or happy with at least the majority of it. That’s because different lifestyles appeal to different people. What some people call conformity, others call comforting structure. What some call a boring, by-the-book life others call relaxed and simple. Keep this in mind as you consider whether you want to adopt the lifestyle of a 1950s housewife or not.

So with women having worked so hard to get to where we are now, why would anyone want to go practically 70 years back in time? From what I’ve seen, there are four main reasons.

1. Simple Living- Life is just so crazy and complex these days. There is so much going on, and as a modern woman, you have to stay on top of it all. But back in the 50s, you could take a step back and let your husband deal with more of it. Some people view this as giving up independence. But you could also see it as delegating responsibilities, as a kind of measured give and take.

RELATED: How Simple Living Can Make Your Life Better 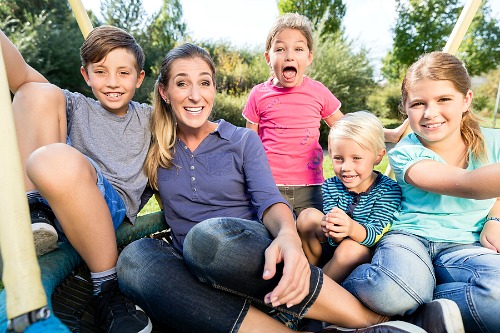 2. Family- We all know that no matter what commercials try to make us believe, at the end of the day, family and love are the most important things. So some women would prefer to be able to devote their time to their family instead of to a career outside of the home.

3. Enjoyment- Different people like different things. Some people truly love the challenges of managing a household (and it is truly challenging). They take pride in keeping their home neat and tidy and cultivating a safe, loving environment for their family. So for some women, a day spent reorganizing the pantry is preferred to a day spent having meetings or dealing with clients.

4. Religion- The traditional 50s lifestyle fit closer with the ideals of Christianity than some modern lifestyles do. As a result, some people have religious reasons why they like the lifestyle of a 1950s housewife.

Things to Consider Before Becoming a 1950s Housewife

Does one (or more) of the reasons above appeal to you? Or maybe you’re on the fence about the whole 50s housewife thing. Here are some things to keep in mind before you go shopping for retro aprons!

1. Life is about balance. No one says you have to go 100% old fashioned when emulating the 50s housewife lifestyle. Maybe you do most of the homemaking tasks, but leave your husband in charge of cleaning (believe it or not, some men actually like to clean). Or maybe you still work outside of the home, but as soon as you get home, it’s 1950s time! Or maybe you find a way to make money from home. There are ways to merge traditional and modern ideas to create the perfect lifestyle for you. 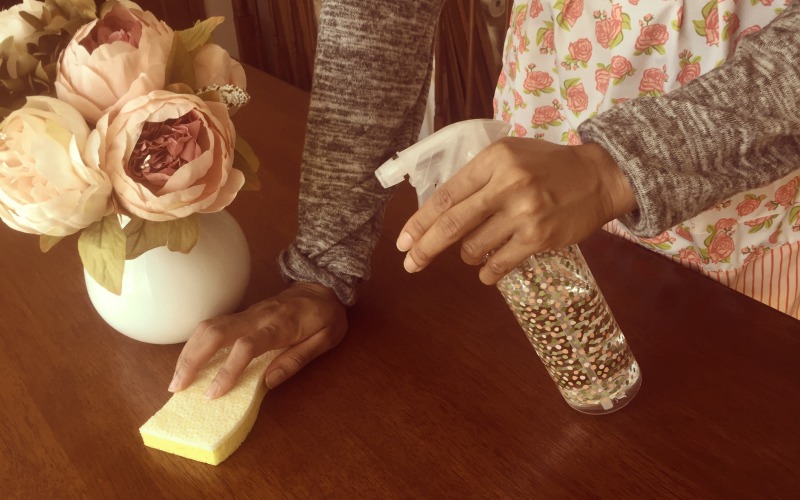 2. Being a housewife (from any era) is challenging. You do have some conveniences nowadays, of course, as a result of technology. No 50s housewife ever said “I’ll just run the Roomba for 30 minutes while I rest for a bit!” But still, managing a home (even a small home) is hard, with or without children in it. Don’t be tricked by old ads, not every 50s housewife managed to be amazingly happy, look impeccable, and keep a spotless home day in and day out. Life is messy, and no one, of any era, is perfect.

3. Being a housewife is now a choice. And choices change things. It’s very different to do something because you want to versus because society wants you to. Nowadays, if someone asks you what you do and you say “I’m a housewife/stay at home mom,” it’s very likely they may be a little jealous. They may wish that they have more time to spend on their own home and more time to spend with their kids. Not that you should ever do anything just because of what other people may think. But just know that being a housewife is more respected these days than ever before.

4. Valuing money doesn’t mean you don’t value family. Some people act as though it’s only one or the other. But as women prove time and time again, you can have a successful career and be an amazing wife and/or mother. Just because you respect money and what it can buy doesn’t mean you’re somehow blind to how much your family means to you. 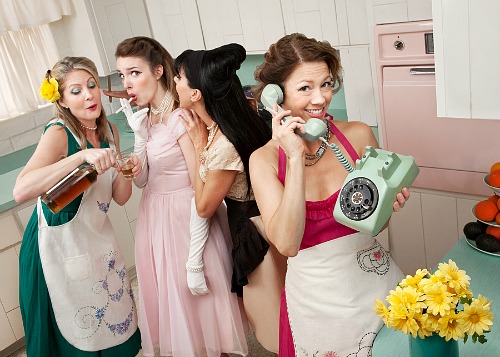 6. It’s impossible to actually become a 1950s housewife. Mainly because this isn’t the 1950s! 50s women didn’t choose to be the way they were, they were a product of the times. So even if you make a concerted effort to be like an old-fashioned housewife, you’re still going to be living in the 21st century and it’s going to affect you. Who knows, in a couple of years you may step outside to pick up your grocery delivery from a self-driving car! No 50s woman could even dream of doing that! So don’t be upset if you can’t perfectly create the lifestyle you read about in old magazines or see in old movies. Just take the parts most important to you and incorporate it into your modern life.

So, should you be a 1950s housewife? That’s up to you! There’s nothing bad about emulating the lifestyle. But obviously, it won’t be a good fit for everyone. Whether or not you enjoy it is going to depend on what you want out of life. Why not give it a try one weekend and see how much of it (if any) sticks. In the end, it’s all about finding what’s right for you and your family.

What do you think about the 1950s housewife lifestyle? Does any of it appeal to you? 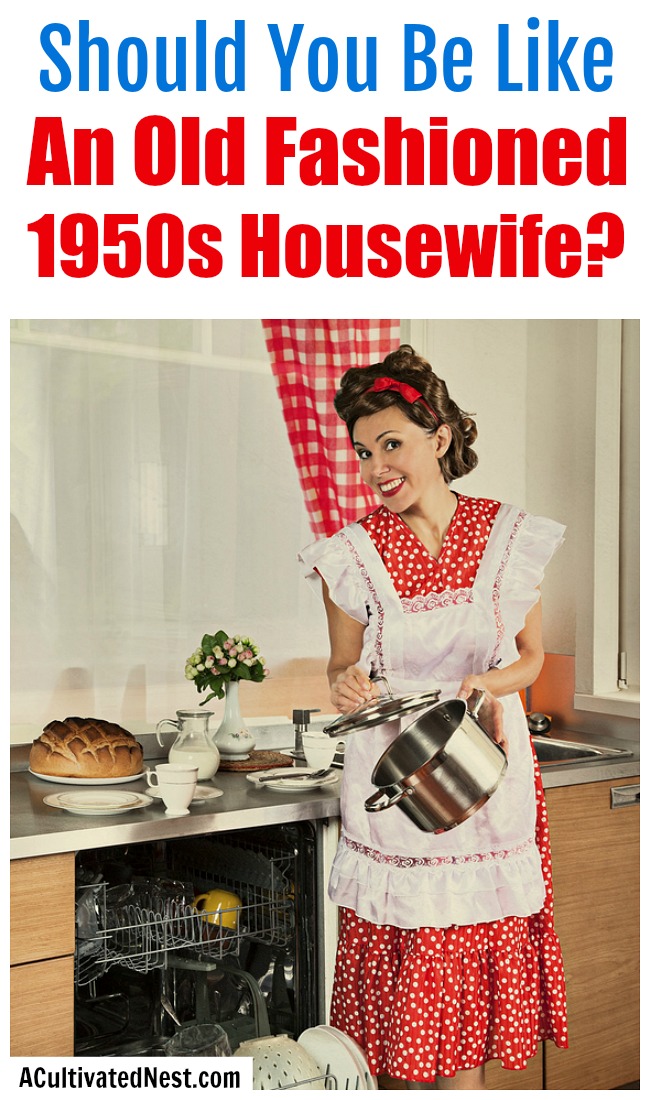