Making your own homemade cleaners can be a great decision! It saves you money, and allows you to avoid dangerous chemicals found in most commercial cleaners. But you shouldn’t just mix together ingredients at random! Even though they’re all-natural, the ingredients used to make homemade green cleaners still include substances and chemicals that can interact. And the results could be very dangerous! Here are some All-Natural Cleaning Ingredients You Should Never Mix! 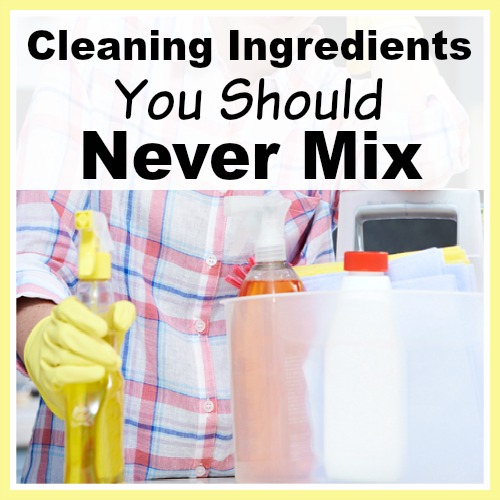 Don’t let the information below scare you off from making your own DIY household cleaners! While you could just buy all-natural cleaners at the store, those cost more than conventional cleaners, and the cost will add up quickly. On top of that, you have to trust that every ingredient in a supposedly green cleaner is safe, which isn’t always the case. That’s why I like to make my own cleaners- I know exactly what’s in them. You just need to know a little about the substances you’re mixing in order to stay safe. You wouldn’t want to create something that’s actually much more dangerous than a properly formulated commercial cleaner! But if you know the information below, that shouldn’t happen.

White vinegar and baking soda are very popular all-natural cleaner ingredients. But they’re also cleaning ingredients you should never mix. In terms of acidity, they’re opposites, with vinegar being acidic and baking soda being alkaline. If stored together in a closed container, the vinegar could make the baking soda foam, thus making the container explode! And don’t get tricked by the bubbles caused by mixing the two outside of a closed container. They’re actually canceling each other out, not becoming a stronger cleaning agent.

Two other natural cleaning ingredients you should never mix are vinegar and hydrogen peroxide. Together, they create peracetic acid. Breathing in the vapors of this acid can hurt your lungs. It can also irritate your eyes and skin. Frequent exposure to it can cause lasting lung damage.

While not dangerous, the combination of vinegar and Castile soap is ineffective. The acidic vinegar breaks down the Castile soap, creating a chunky, oily mixture.

You have to be really careful with mixing bleach with things. If you mix vinegar and bleach together, the mixture will create chlorine gas, putting you at risk of chlorine gas poisoning. At low levels, chlorine gas irrigates the lungs, causing coughing, difficulty breathing, and chest pain. At higher levels, the gas can kill you. As a result, never put vinegar and bleach together in washing machine as a homemade all-natural washing machine cleaner. Instead, run an empty load with bleach first (letting the load finish and water drain away), then run an empty load with vinegar.

Did you know that a French scientist was the first person to publish the discovery of chloroform? Bleach and alcohol were part of the combination he used to create it. So obviously bleach and rubbing alcohol (AKA isopropyl alcohol) are cleaning ingredients you should never mix together. At lower concentrations the vapors created will irritate your lungs. At higher levels, they can be deadly.

By now I’m sure you’re realizing that bleach should actually never be mixed with anything other than water! Mixing it with ammonia is also very dangerous, as it can create a harmful gas called chloramine.

Also, while it’s not a good idea to create the 6 mixtures above, in many cases using the ingredients one after the other is perfectly safe. For example, you could scrub a surface with baking soda, wipe it down, then clean it with vinegar. The important part is that you wipe off the first ingredient (in this case the baking soda) before using the second ingredient, that way they don’t co-mingle.

And if at any time you mix two or more natural cleaners together that aren’t on this list and you start having adverse reactions, move to fresh air. While you’re detoxing, take the time to Google how to properly dispose of whatever mixture you just created.

Have you made any of these mixtures before? 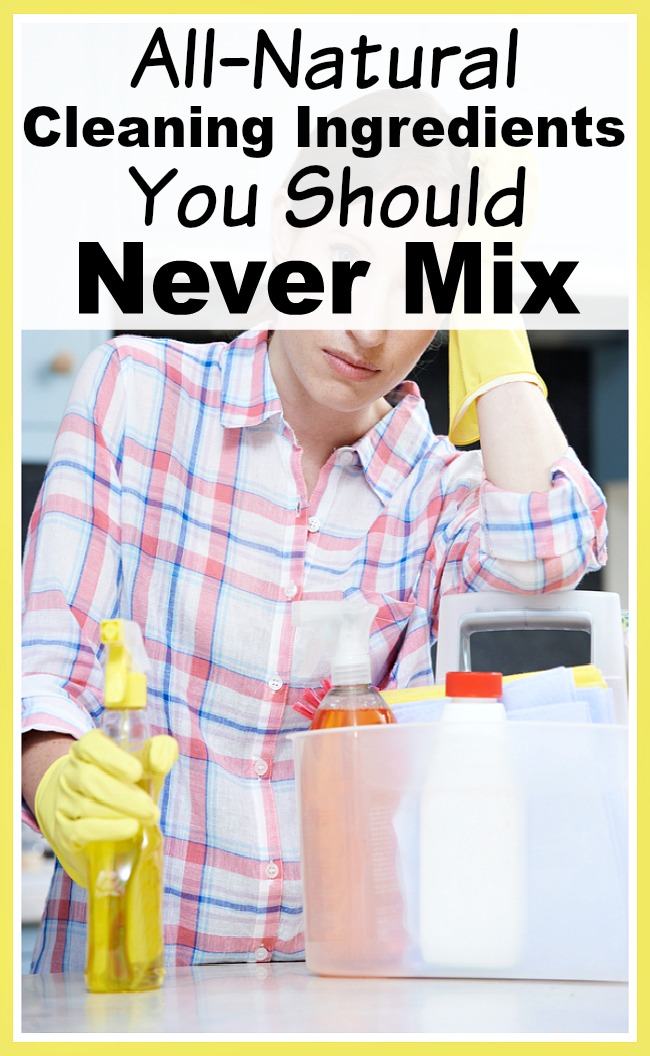